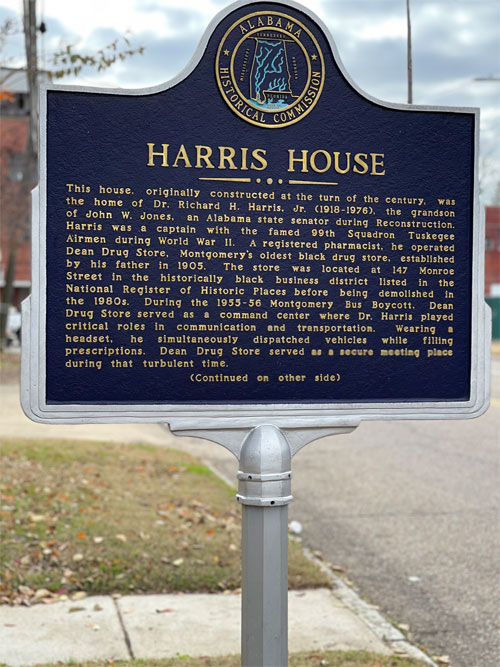 This house, originally constructed at the turn of the century, was the house of Dr. Richard H. Harris Jr. (1918-1976). The grandson of John W. Jones, an Alabama state senator during reconstruction. Harris was a captain with the famed 99th Squadron Tuskegee Airmen during WW II. A registered Pharmacist, he operated Dean Drug Store, Montgomery’s oldest black drug store, established by his father in 1907. The store was located at 147 Monroe Street in the historically black district listed in the National Register of Historic places before being demolished in the 1980s. During the 1955-56 Montgomery Bus Boycott Dean Drug Store served as a command center where Dr. Harris played critical roles in communications and transportation. Wearing a headset. He simultaneously dispatched vehicles while filling prescriptions. Dean Drug Store served as a secure meeting place during that turbulent time.

Between May 20-24, 1961 Dr. Harris opened this home to a group of 33 students from Nashville, Tennessee, who were challenging interstate bus segregation. Known as the Freedom Riders, the group was attacked at the historic Montgomery Greyhound Bus Station upon arrival and harassed by rioters. In the days following attack, martial law was declared and Harris’ home served as a haven for the Freedom Riders. Dr. Martin Luther King Jr., Dr. Ralph D. Abernathy, James Farmer, John Lewis, Diane Nash, and others met at the Harris House to develop plans and strategy for continuing the rides. On March 24, after solemn prayer, the Freedom Riders were escorted by the National Guard to the Greyhound Bus Station and continued on with their mission to Jackson, Mississippi.

In March 1965 Dr. Harris assisted local black doctors on the grounds of St. Jude’s Hospital with medical care of the participants of the historic Selma-to- Montgomery Voting Rights March.

In 1992, the house was listed to the Alabama Register of Historic Places as a Contributing property of the Centennial Hill Historic District.

Richard Henry Harris, Jr. was born on August 22, 1918 in Montgomery, Alabama to Richard Henry Harris, Sr. and Evelyn Jones Harris. His early education was formed at Alabama State College laboratory school. Later, his family moved and lived in Tuskegee, AL with the Foster Family, grandparents of singer/songwriter Lionel Ritchie. Richard, Jr. attended and graduated from Tuskegee Military Academy for boys on May 23, 1935. He left Tuskegee and enrolled in Williston Academy for boys in East Hampton, Massachusetts for college preparatory schooling. He graduated from Williston in 1937. His parents intended to send him to one of the Big Ten Colleges, however, during a holiday break, a college recruiter from Fisk University, a prominent university for Negroes in Nashville, Tennessee, told him about Fisk University. He was immediately enthused and excited. He enrolled as a freshman for the 1937-38 school terms. He LOVED Fisk!!!

Richard H. Harris, Jr. graduated from Fisk University in1941 in mathematics and went to Chicago, IL to attend graduate school. However, World War II had begun and he was called to duty. He entered the Tuskegee Airmen Pilot Training Program in 1942. He was in the Class of 43-F-SE (6/30/1943 2nd Lt. 0807096) and became a pilot with the 99th Fighter Squadron of the 332nd Fighter Group. While training in nearby Walterboro, SC., Richard met Vera McGill of Charleston, SC. They married on September 5, 1945 at Godman Field in Louisville, KY.   After his discharge in 1946, he came back to Montgomery and worked at Dean Drug Store with his mother, Evelyn Jones Harris, the owner, and Dr. Russell Smith, the hired pharmacist. Richard then attended Xavier University School of Pharmacy in New Orleans, LA and earned his pharmacy degree in May 1953. He returned home and eventually become the owner and operator of Dean Drug Store located at 147 Monroe Street in Montgomery, AL. He remained an avid supporter of civil rights until his death in 1976.

Richard and Vera were the parents for four children, Adrian, Valda, Richard III, and John.